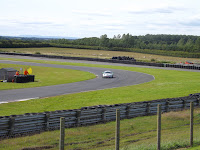 With the grid starting place much further back in this second race (14th) Marcus had his work cut out but knew he was capable of finishing much higher up the order. Against the odds he made an excellent start making up 5 places in just the first lap. Having quickly cleared the slower cars out on track Marcus was pursuing and closing in on Ben but things soon came to a halt when the red flag came out on lap 8. Richard Bennet had spun off track on the blind hairpin exit, most managed to dodge the stationary car but unfortunately Mark Koeberle was unaware of the stranded 993 and struck it.
With around 11 minutes of the race left it was decided to continue once the cars had been cleared up. The grid was reformed with positions decided on the lap before the incident and the cars went out for a 5 lap sprint. 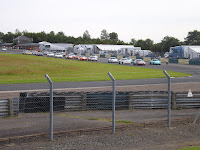 Marcus was hopeful he may be able to progress further up the field and there was a good chance after another good get away. Things soon got quite crowded at the front of the pack and Marcus was put under a considerable amount of pressure into Hawthorn this meant he found it impossible to avoid nudging Ben slightly from behind. As the sprint continued Marcus proved his pace, being the 3rd quickest car out on track but felt it not enough for a clean risk-free pass particularly past a team mate. Marcus kept very close to Ben throughout the last few laps but with Richard Ellis closing in on them as they diced slightly into Clervaux on the last lap Marcus decided it was best just to follow for the rest of the lap and get a clean finish. The results were a repeat of the first race with Marcus getting 6th place, a most impressive outcome after moving up 8 places from where he started.
The next outing is a return to Oulton Park on Saturday 11th August.  The team are hoping to be out testing beforehand and able to challenge for the podium spots at this track, a favourite for both drivers.


In car videos from both races are on You Tube, to view click here.

Posted by Marcus Carniel at 12:06 No comments: 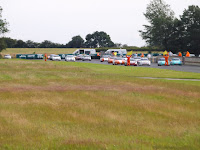 Despite being quite far back on the grid Marcus manage to get a decent start into race one. He made the risky manoeuvre of driving straight down the outside. This could have resulted in him being shunted into the gravel but he pulled it off and gained a couple of places. Regrettably he lost the gained places due to having to avoid contact with Ben and two 968’s which subsequently put him on a head-on collision course for the tyres he appeared to grow rather fond of on the chicane exit, avoiding them put him back yet another place. 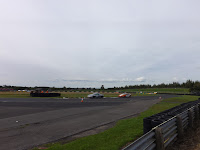 After closely tailing dyer for a good half a lap, He finally gained a place back by passing Chris Dyer on the left hand side coming out of the hairpin down the pit straight then later passed Paul Follett from class 2 entering Tower bend. Both Ben and Marcus managed to hold good places in the race and finished 5th and 6th. Not bad from 10th place on the grid!
Posted by Marcus Carniel at 11:50 No comments: 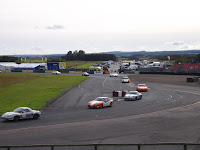 At last, we have had a race in the sun and in the north east at that. It’s hard to tell which one is more surprising! This brighter weather seemed to give everyone a new lease of life on track and we had a technical change on our side allowing the Boxster S’s to run 15kg lighter. This isn’t a lot, but at least it's a step in the right direction towards the 911's - all of which (and particularly the 996 variant) run far more favourable power to weight ratios.
During qualifying Marcus found himself stuck behind other slower cars and was held up by a few yellow flags making qualifying tricky business this time as he struggled to get many clear laps. He was on line for an excellent lap time but it ended up being little compromised at the end.  So unfortunately was placed 10th on the grid but with only hundredths of a second between him and the next 4 cars. His second best lap was worlds away from what he and the car have been achieving hence he was 14th on the grid for the second race. 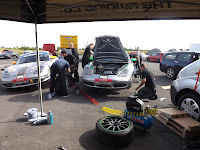 Some changes were made to the car after what was learnt from the racing at Donington and it was further improved in a pit stop during qualifying. This proved just how far the team has come over the last few months with them finding and accessing the problem in just under one minute showing how well they all worked together particularly under pressure.
Marcus also managed to find the team something to fill in the large amount of time between qualifying and the first race by “mis-judging ” the tyres on the chicane exit, hitting them & causing damage to both the left wing and the bumper. The Hartech team rose to the challenge and had the car fixed ready to go out in time for the first race with enough time to spare for a little final polishing.
Posted by Marcus Carniel at 11:40 No comments:

Posted by Marcus Carniel at 13:11 No comments: 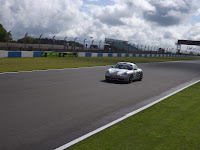 Due to grid positioning Marcus didn’t get the start he wanted into race two with Ben having an advantage on the right hand side of the track and Marcus refraining from swiping in front of him as it could have prevented both of them from making the first corner. Down on the Old Hairpin Marcus passed Mark Proctor’s 993 and gained a place but due to a jerky overtake on the start/finish straight Marcus had to give Proctor room to pass. This battle continued through the Old Hairpin and 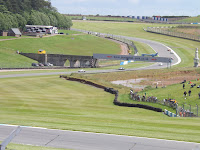 Macleans , consequently both Marcus and Proctor were slower through Macleans allowing Dyer to get down the inside and into Coppice. Fortunately Marcus got him back a lap later in the same place when he went wide onto the grass at Macleans exit. A little later in the race Marcus and Dyer swapped places 4 times in 1 lap! Dyer was initially in a stronger position driving a 968 due to its better acceleration giving him an advantage into Redgate. However Marcus held his nerve even when Dyer 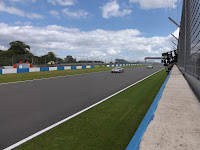 squeezed past on Coppice nearly pushing him onto the grass. Thankfully the Boxster had the advantage of better brakes allowing Marcus to pull ahead into chicane. On the next to last lap there was a back-marker in just the wrong spot entering Redgate, resulting in Marcus sliding round in a very sideways drift and Dyer got past.  Marcus tried to take him back in his favourite move at the Old Hairpin but it wasn’t as successful this time as he under steered off the track on the exit, sending him spinning on the grass, which allowed 4 other cars past (thankfully only 2 from the same class) with only 1.5 laps to go. 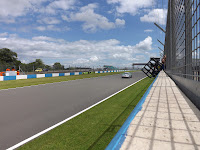 The results from round 6 showed Ben in 5th place and Marcus in 11th.  In a hard day’s racing it was clear that on a fast circuit like Donington the Boxster S model didn’t have the pace of the more powerful 911’s but both drivers and team gave it their all and are looking to being on more equal terms at the next meeting at Croft on 21st July.

Posted by Marcus Carniel at 11:25 No comments:

Race One
In the first race both Marcus and Ben got away with a good start which resulted with them having a drag race to Redgate.  Everyone was quite bunched up so at the Old Hairpin Marcus when saw an opportunity to pass Ben he did so cleanly, they remained together for a few laps but when Marcus lost pace in a slide at Coppice he waved Ben through, realising that to try and defend would slow them both down (even though they were gaining very similar lap times). Edging towards the front they then closed on Richard Ellis (who’d been on pole in his 993), until Pete Morris went off at the chicane, meaning Marcus had to be slightly hesitant, allowing

Chris Dyer past by Redgate.  He then passed Ben into the chicane under yellows so the race ended with Chris heading both Hartech cars but all very close together.  Dyer was issued with a 0.5 second penalty, meaning he only lost the place he nicked and classified as 71/1000ths ahead of Marcus. So at the end of race one Marcus was awarded a respectable 7th place.
Posted by Marcus Carniel at 11:24 No comments:

Qualifying
Well conditions for Saturday’s racing were somewhat contingent with weather varying from glorious sun to torrential rain within a matter of minutes. Luckily qualifying and racing seemed to hit the dry times in the day.  Marcus struggled to get the clear track he needed to get the best qualifying times possible but was relatively happy with gaining 6th place twice out of the many other drivers on track.
Posted by Marcus Carniel at 14:25 No comments: