Goose racing doesn’t just stop at the Porsche Club Championship. Marcus also partook in a two driver race in Anglesey in a Lola Sports 2000 Historic single seater. They qualified in pole position and went on to win the 45 minute race, having lapped most of the field and with Marcus beating the car’s owner (whom he shared the car with) to fastest lap – proof that he’d succeeded at the new challenge of driving a car with slick tyres and aero down force.

He also worked alongside former “Stig” ( Phil Keen) in the Spa 25 hour Fun cup team race. This proved to be an interesting event with over 150 participating cars and racing that went on through the night. The team unfortunately had to forfeit the race with 7 or 8 hours to go due to a terminal engine failure, but Marcus was happy to have proved himself to be “on the pace” and coped well with the new challenge of night time racing.

(Right) The Fun Cup car in the pits for service at Spa
In November he did another race in Anglesey in, a 1980 Tiga Sports 2000 historic. They qualified 5th but after a well driven race by both him and the owner they got themselves a podium finish, a satisfying result considering the cars in 1st and 2nd had approximately double and treble the horsepower. 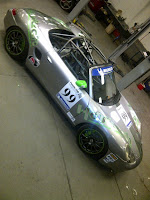 For 2012 Marcus will be contending the Porsche Club Championship, entering all the season’s races, driving a Class 1 Porsche Boxster S for Hartech Porsche Specialists.  Two cars have been freshly built, the other to be driven by Ben Demetriou, and will be out testing shortly.  Marcus is extremely excited about being involved with the Hartech team and the launch and development of the new cars.
Posted by Marcus Carniel at 19:17