Everyone was still on an amazing high following team Hartech’s brilliant performance in race one (and possibly after the large amounts of espressos, Monster and Hobnobs consumed in the 5 hour wait!). We still had good grid placements for this race with Tom still on pole, Marcus slightly further back still surrounded by the 911’s and Stuart on row 10, a row ahead of Gary.

Marcus got a great start off the line making up two places past Kevin Harrison and John McCullagh following through Richard Ellis giving him a good boost going into the first corner. Taking Ellis on the second he had got himself up to 7th place in just 30s. Unfortunately Tom didn’t have such a successful race start with Sumpter getting a stunning launch into the race leaving him leading the pack into Paddock Hill.

This race was again subdued to great delays following a car being stranded at Druids due to suspension damage. The safety car remained out for a further 6 laps!

Tom came out, following the safety car, to set the fastest lap and took on Sumpter at Druids. The pair spent the remainder of the race redefining the pace with Tom trying to shake of Sumpter but at the same time dealing with the back markers he was catching up to. 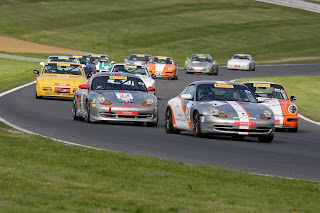 The cars had again split up into a series of packs with Gary and Stuart placed further back stuck and hassled by other members of class 2. However they both finished in respectable positions with Gary coming 14th in class 1 and Stuart finishing 5th in class 2.

Marcus managed to hold off hard-charging local man James Hilliard to finish in 6th place. Two great results for him over the weekend considering this was the first time he had raced for team Hartech at Brands Hatch.

Tom fought off Sumpter for the remaining laps to gain his second win of the day. Another fastest lap completed his “full house” and was a great achievement for him and the whole team.
For one Race Meeting not one of the cars suffered any damage so the team should be all set to take the grid by storm at the next rounds at the now familiar Donington Park on 1st June.
Posted by Dominique Roberts at 20:54 No comments:

Race one
After a long wait from qualifying we finally got round to race one at 12 pm. Tom was set at the front of the pack ready and raring to go however he was placed within a breath of Sumpter so he knew the battle would begin instantaneously. Marcus running in 7th position was well placed on the right hand side of the track to take the first right corner but being surrounded by 911’s was bound to cause an issue at some point in the race.
Sumpter unfortunately took Tom into the first corner but within a lap he had regained his rightful first place through out braking him coming into paddock. Marcus got a good take off the line ,except due to the traffic out in front of him he was held back but by lap two he had regained the pace and began to climb.  He’d also had a great view of the frantic paint-rubbing battle between Pete Morris & Adrian Slater at the start, and then on the run down from Druids, where Morris slewed sideways and as Slater slowed to avoid him Marcus was able to mug them both, only to over-cook it slightly at Graham Hill bend, allowing Slater back past.  Morris went off & then had to pit due to a broken tyre valve, ending his chances of challenging the front runners.
Unfortunately Chris Dyer’s Cayman having been tipped off at Clearways on lap 4 caused the deployment of the safety car which was there to hold up the race but not just for 1 or two laps for 6 laps (due to a mishap of judging which was the leading car)! Practically restarting the race when it was taken back in, Tom was left with the job of widening the gap between him and now Mark McAleer in a 996. However the holdup caused was beneficial further back allowing places to narrow between each of the drivers giving Marcus a chance to make it up to make it up to 6th place.
From this point on Marcus was left tailing McCullagh Class two leader closely (that close he could see McCullagh’s tail pipe dragging on the floor almost), who’d managed to get past him out of Paddock Hill.  Marcus was putting down some great lap times during this pursuit (proving he had better pace) and nearly managed it past at Druids but McCullagh made it up on the following straight and just got away from the Boxster.
This was the end of what had now become a leading pack, the 2nd pack were having their own battle slightly further back. Five 911’s were fighting in Marcus’ tracks. Following them were the other two Hartech members Gary and Stuart having their own battle constantly interchanging places throughout the race. just swept past Stuart on the last lap putting him in 11th place when the flag came out. However despite the external crusade with Gary, Stuart kept a great pace through the whole race and went from 4th to 2nd place giving him his first ever podium in the championship.
Marcus held on to the place he made up during the race after some great defending skills were shown meaning he finished 5th in class.
Tom held off McAleer and won the race giving him his first win of the championship to go with his pole position and the fastest lap of only 51.9 s breaking the record for the Porsche club at Brands.


Posted by Dominique Roberts at 14:15 No comments: 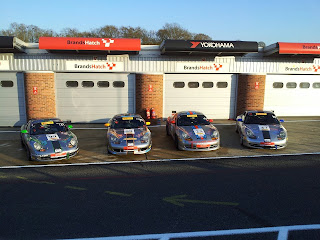 Practice evidently made for perfection with some incredible qualifying times even on the packed grid of 32 cars. Marcus found some good space on lap 17 and put down a great lap time of 52.9s putting him at 7th place on the grid surrounded by some fierce 911 competition. Tom took the grid by storm leading the pack and gaining pole position for both races. Gary came in with a respectable 17th place on grid, he unfortunately found himself in numerous build ups of traffic. Stuart gave the team a great boost qualifying 4th in class 2 a great achievement for him and the car.  Overall the session went well and we felt we were on for a good day!
Posted by Dominique Roberts at 13:55 No comments:

Time for the second meeting of the season already! The Hartech Team will be trekking down to Kent in force for this weekend’s Racing event. After the great performance by each one of the drivers at Donington Park Circuit, we have high hopes for this race.

Marcus, along with Stuart and Tom, will be going down to the track early for a final test day in order to fine tune the cars and the drivers, hopefully helping to get both onto podium positions in their respective classes. Gary, being the more seasoned driver in the team and an instructor to, has visited Brands Hatch more regularly than the other drivers however will be joining them for the afternoon session of the test day.

This will be the first time Marcus has raced for Hartech on this track, as last year he was still recovering from an arm injury that prevented him from racing.  Although this is not Marcus’ favourite track he has had some great results here in the Porsche Club Championship,  including coming 3rd overall in 2007 (in a class 2 car!) and 2nd overall in 2010 (the last time he raced here).

The fault that caused Tom to retire from Race 2 at Donington has now been fixed so with the car under him that took Hartech’s sole Boxster S race win in 2012 he should be in prime condition to take on the current leader Pete Morris once again.
The day will be another early start for the team with qualifying at 9:00 am race one at 12:35 and race two 5:05 pm.

But overall the day looks set to be a good one with sunny weather forecast and plenty of Hob-Nobs packed, what a great way to spend the Bank Holiday weekend!

Follow us on Twitter @gooseracing  for on track updates throughout the weekend.
Posted by Dominique Roberts at 19:40 No comments: