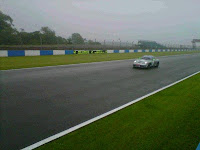 Due to the awful testing conditions provided by the delightful British summer weather the team had to abandon their original plan of testing the cars on Saturday 16th June. However the decision to move the test day proved to be a wise one as the conditions on Thursday 21st June were perfect.  Varying weather conditions meant that many people did not turn up to use the track hence we had plenty of space to play about with the cars and push them to their full ability. During the morning session we were able to test Marcus’ car on a wet track meaning we could fine tune the cars set up and trail it with the wet tires. Later in the morning although still a bit grey and gloomy team sprits remained high and it stopped raining long enough for the track to dry out so we modified the car with a different set up and sent it back out. Bens car was booked for the session later in the day meaning the Hartech boys had a12 hour day but they managed to cope aided by 2 packets of haribo, a large amount of monster, a packet of Hob-nobs (which seemed to decrease quickly when Marcus was around) and a coconut cake for those of us too fussy for dark chocolate Hob-nobs.  We even managed a full day without a kettle because two certain people forgot it despite it being on the kit list twice! 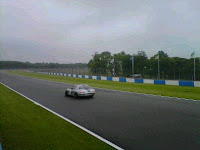 All in all it was a brilliant day and extremely beneficial for every member of the team. We were getting some excellent times from both cars and hope we will be driving straight into those pole positions on race day Saturday 30th June. Coinciding with our racing the truck racing grand prix will also be taking place at Donington park, to view the timetable of events click here.

Just a few pictures of what else was out on track... 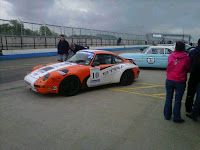 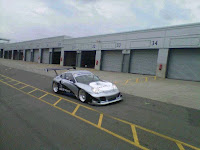 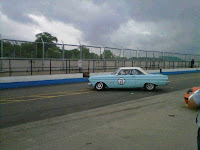 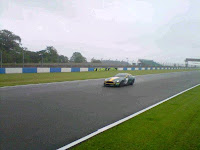 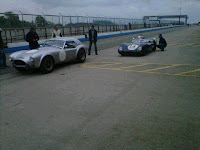 Posted by Marcus Carniel at 12:03 No comments:


In car videos from Oulton Park can be found on Youtube, to view click here
Posted by Marcus Carniel at 19:27 No comments:

Overall, the weekend was a success not just in terms of showing the cars’ pace and respectable results, but the drivers and technicians having learnt from it too.  Everyone worked well together and is feeling positive about continuing to improve the pace with a methodical and enthusiastic approach (still fuelled by tea and Hob Nobs).  There’s a track day at Donington Park planned before racing there on 30th June (a high profile meeting with crazy truck racing on the programme).

Posted by Marcus Carniel at 19:24 No comments:

Race Two
The track had dried by now and Marcus was looking forward to improving on his 7th place finish.  Starting from 8th he got away ok and managed to avoid contact at Old Hall, where a few cars were brushing against each other, and was into 7th out of Cascades.  Again he had Paul Follett ahead, who made it anything but easy to pass.  This allowed Chris Dyer to close up behind, so much so he decided not to bother using his brakes into Cascades and used Marcus’ rear bumper to slow down instead – you could perhaps give him the benefit of the doubt for a small rub but the double tap shown by Marcus’ rear-facing camera showed that Dyer didn’t even lift off the throttle!  Luckily it didn’t hamper Marcus’ progress and instead sent Dyer off on to the grass at the exit.  At the end of the lap Marcus found a way past Follett into Lodge and was up to 6th.  He continued in this position, with lap times on a par with the 911’s of Mark McAleer and Mark Proctor in 4th & 5th, but unable to close the gap.  Further down the order Lee Atkins had a big off at Cascades, which brought out white flags from Old Hall and Marcus found himself with the unique experience of passing a blue-lighted BMW X5 Medical Car during a race as it exited the pit-lane!  Shortly after the Safety Car boards were out as Atkins accident was dealt with and with not long to go it looked like the race may finish behind it.  The marshals worked quickly though, allowing a last lap sprint to the finish line.  Pete Morris was in the lead and made a very canny re-start, making the most of his powerful 996 by backing the lead pack up with a lift off the throttle just before the start/finish line, catching everyone out and allowing him to then blast away.  Having much less power than the 993 of Mark Proctor ahead left Marcus at a disadvantage and unable to profit from the re-start, so it was head down to complete the lap cleanly and not give any opportunity to Dyer, who’d had chance to close back up.  As a plan that was fine, until Pete Morris spun onto the grass at Knickerbrook, causing Mark Proctor to slow a little and Marcus had to do the same to avoid his rear end.  This allowed Dyer a better exit and he just got his nose alongside Marcus’ rear on the inside on the approach to Druids.  Rather than taking his normal turn in (risking an accident, which whilst it would have been Dyer’s fault, could still have put him in the gravel), Marcus turned later and wider but without having slowed enough this sent the car into a huge sideways slide.  He used all his skill to avoid a spin and keep the car on the track and the thought crossed his mind that although not a quick way to go around, he was in fact blocking the whole track with his dramatic drifting stunt!  Immediately afterwards though Dyer went past down the inside and with just one bend to go there was no time to take back the place before the chequered flag fell so in half a lap Marcus had gone from 5th to 4th and back down to 5th again!  Still, with a lap time within a second of the race winner and the car in one piece it wasn’t a bad result and the Hartech team (who had worked hard all weekend, even doing an express clutch replacement on Ben’s car between races) were full of congratulations.  Ben started 12th but had an issue with a loose wheelarch liner, forcing him to pit mid-race leaving him crossing the line 23rd but with another un-damaged car.

Posted by Marcus Carniel at 18:44 No comments:

A few photos of the race 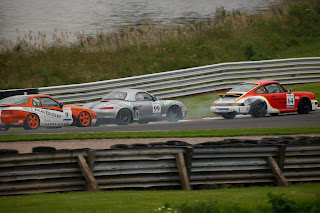 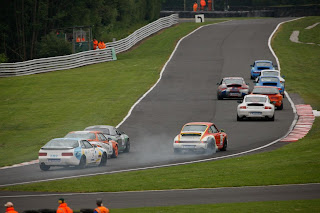 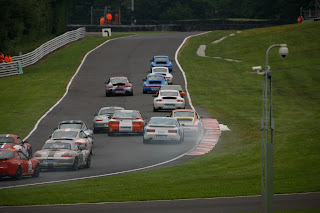 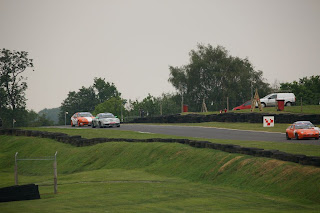 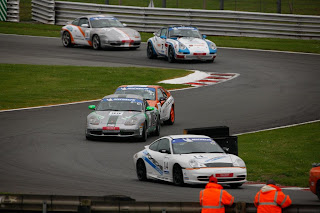 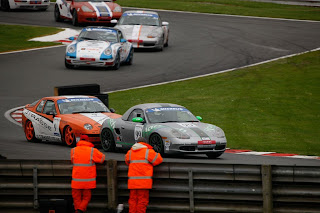 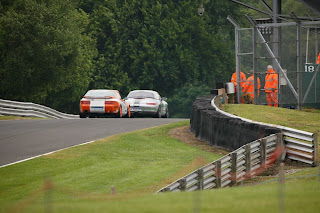 Many more photos available on the autoperform.co.uk gallery, to view click here

Posted by Marcus Carniel at 18:39 No comments:

Sadly, it hadn’t dried up for the first race.  Realising the limitations, and not wanting undue risks taken with his car, team owner Barry Hart made it clear that there was no pressure for a high placed finish, it was more important to try and bring it back in one piece – it was after all its first race.  Not having done any practice starts, and in tricky conditions, it was quite clear getting a good getaway was going to be a challenge, but by the second corner (Cascades) Marcus

had gained a place and was running 8th.  He was then held up by class two leader Paul Follett until a lap 3 pass round the outside into Cascades.  Sadly, the lead group were now a long way off and his mirrors were now full of the red Boxster S of Lee Atkins, who started 16th.  A few laps of dicing ensued until Atkins bravely dived down the inside into Island bend, a move that Marcus chose not to block for fear of having Atkins drive into his side.  He stayed with Atkins but there was never a clear opportunity to pass safely.  In the closing laps the lead car retired and a few went off, including the 996 of Paul Winter running in 5th place hitting the barriers at the exit of Old Hall.  This brought out yellow flags from before the corner, which were ignored by the tussling 911’s of Mark McAleer and Kevin Harrison, who both passed Marcus (who had rightly slowed for the hazard) before the green flag at the entry to Cascades.  The race finished in this order, Marcus crossing the line 8th, but later being classified 7th after a 5 second penalty for McAleer.  This wasn’t bad given the conditions and the team were pleased, not least because the car came back undamaged.  With improvements still to make it was a respectable result, but not enough to impress Marcus’ father who commented “I’m not used to seeing you so far back!” – this from a man who was nervous about viewing in the first place, having watched Marcus dramatically total a Porsche 944S2 in a multiple barrel roll last time he raced at this track.  There’s no pleasing some people!  Ben started 6th but fought through and managed a podium finish, another great result.
Posted by Marcus Carniel at 17:19 No comments:

Having seen dry weather forecasts all week, it was rather dis-heartening when the drizzle started early on Saturday morning.  This turned into a light rain that made qualifying quite a struggle – the car’s set-up (and lack of “wet” tyres) not well suited to the conditions and seeming to make it want to swap ends at every opportunity.  In Parc Ferme pole-man Mark Sumpter commented that it had looked “a bit of a handful” as he’d come past.

Having tested his sideways car control skills, and pleased not to have spun or gone off, qualifying 9th and 8th for the 2 races was not too bad but some way short of where Marcus wanted to be.  Still, it looked like being a dry race, and starting further back would make things more interesting in the race…
Posted by Marcus Carniel at 17:01 No comments:

Having previously completed under 10 laps of a soaking Silverstone on Easter Monday, Friday’s test day provided Marcus with an opportunity to finally drive the car in dry conditions.  The Hartech team were as sharp & enthusiastic as ever with the kettle boiled and a brew ready for him in 30 seconds flat, with the added luxury of a dark chocolate Hob-Nob or two.  It was then down to business as both Ben & Marcus made their way out on to the track in the Porsche Boxster S’s.  A couple of issues were identified with Marcus’ car, some changes improved things although the brakes continued to be a bit of a weak point round the punishing Cheshire circuit.  His times still looked respectable in the low 1.57’s but it became clear there was nothing could be done to improve on that whilst away from the workshop, so he sat the last session out to preserve the car for race day.  Ben’s times were similar, the differences between the cars not appearing to make much difference on the stopwatch.
Posted by Marcus Carniel at 18:34 No comments: